After scooping up their salted caramels and Phinney bars in our shop, I was quite eager to make a stop over at Theo‘s factory whilst in Seattle.

Walking through Fremont towards their brick building is quite something. You think you can smell chocolate when you walk through our door? We could smell the acids being released through the conching process nearly two blocks away. If you get lost on the way to the place, you can easily follow your nose.

For $6 we were able to tour the the factory with about a dozen others, and a guide describing each step of the bean to bar process. Though I discuss the steps of ‘bean to bar’ in tastings and with customers all the time, it was quite lovely to see it all being done.

And so, I give you our tour of Theo Chocolate:

The Roaster: First the beans are washed and then they end up here. This is where the beans begin to take on their final flavour.

The Winnowing Machine: From the roaster the beans go into this machine, where the husk is removed and the beans become nibs.

After the Winnowing machine things got a bit more complicated as machines began work within their green casings. In these machines it seemed that the cocoa butter was being separated from the solids, and then added back together before heading over to the ‘mixer’ just behind us. This was where flavourings were added. From there the chocolate worked its way through the water-heated pipes to the Conche, just on the other side of the tour guide, where the particles were refined and some of the acids released. This was the smell that filled the factory and beyond.

From here we were taken to the confection kitchen, where all their caramels and ganaches are created. While we were visiting, they were prepping for Pear-Balsamic ganache while another person was creating the ‘jam’ part of PB&J truffles – the smell was amazing.

Finally, we took a peek at the bar makers before heading into the retail space again. The chocolate moves through the pipes and into bowls, where it is poured into the moulds. After that a machine vibrates the moulds to make sure no air bubbles make it into your bars.

And then back into their beautiful retail space.

Theo clearly has their bar and confection making down to a science, and they have become a well known chocolatier throughout the U.S. We saw their bars in grocery stores and in almost every chocolate shop we visited. Our tour guide said to keep up with the demand, they recently added a third shift to their lineup, which means they are making chocolate 24hrs. a day. Crazy, but it means more of their caramels and coconut curry bars for me… and you.

We are backing a project on KickStarter that we really like called “A Edible History of Chocolate“. They are almost there but they need more people in the next 4 days to jump in. If you are interested in tasting some cutting edge chocolate from Mexico by way of Hawaii, sign up!

Here is a little video from the folks at Madre Chocolate:

and the current status:

A few people have been coming into the store and have asked when the next Chocolate Making class is. It is set for June 17. We have about 2-3 spots left so call the store or come on in and sign up! Classes are $85.00/person

Claudio Corallo is a genius, and this video proves it! A British TV crew travel to Sao Tome and document how Claudio and his family grow and process the beans. I found this video fascinating, and I hope you do too. 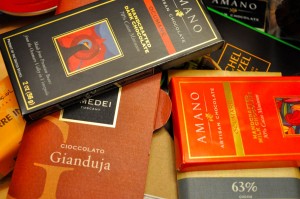 Chocolate tastings are a great way to introduce yourself to the world of chocolate, or to find a new bar to fall in love with. Find out about the history of chocolate, the mystery behind single origin bars, and what to look for when buying your chocolate. Best of all, you get to sample some of the best milk and dark chocolate we have to offer!

If you are looking for something a little more adventurous, we still have tickets available to the wine + chocolate tasting, coming up this Saturday evening.

You can find dates and buy tickets or gift certificates for all our scheduled tastings here. 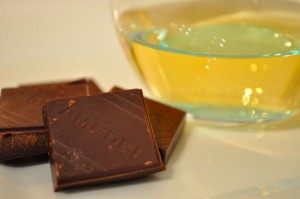 Chocolate making workshops include information on tempering, making ganache and creating your own confections. And you get to take home everything you make!

Dates and tickets can be found here.

Private tastings for groups of 12 or more, and chocolate making workshops for groups of 4-6 are also available. These events are a great way to spend an evening with your friends, family or co-workers. E-mail or call (780.990.0011) for pricing and scheduling.

Making some chocolate dipped strawberries is actually easier than it looks! here are a few tips: END_OF_DOCUMENT_TOKEN_TO_BE_REPLACED

In our first chocolate making class May 15th, students made passion fruit truffles, mocha truffles, fruit and nut mediants, and chocolate bark. Everybody had a lot of fun. At the end of class everybody was able to temper chocolate! 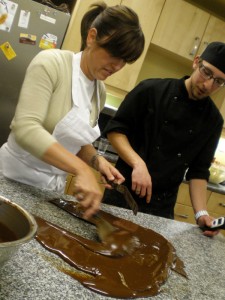 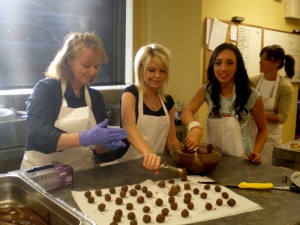 Having fun with Truffles

END_OF_DOCUMENT_TOKEN_TO_BE_REPLACED

Tickets are now on sale for our first chocolate making class!

Click here to find out more and purchase your tickets.