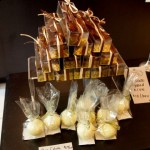 1 thought on “Father’s Day 2010: Chocolate covered bacon and much more.”